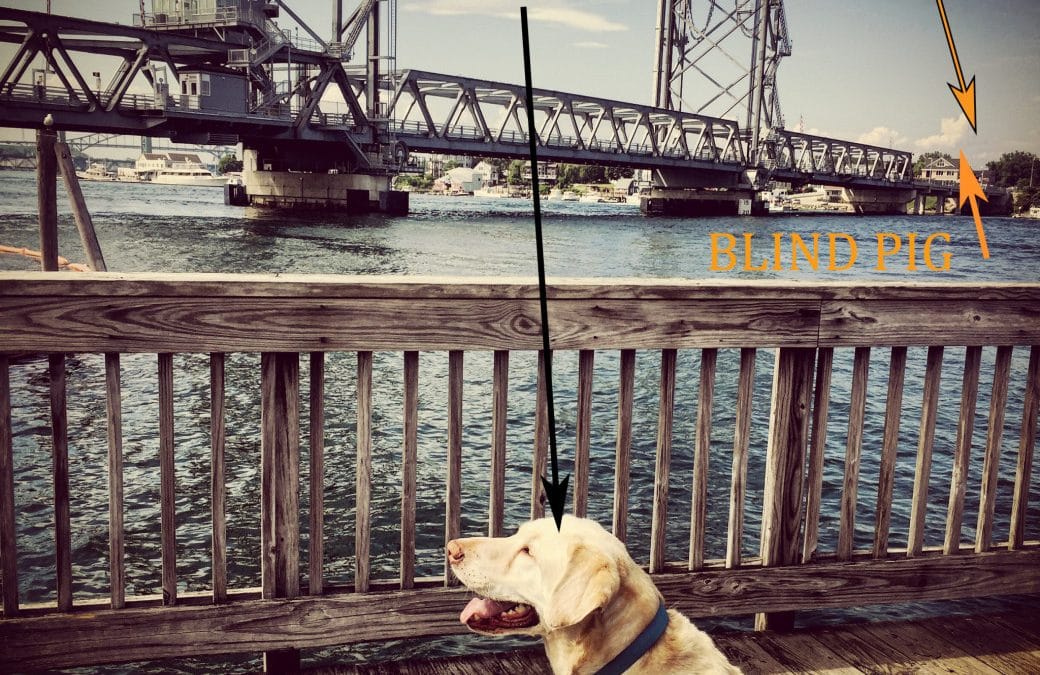 Portsmouth snobs like myself often poo-poo the goings on over the bridge in our sister state of Maine. But Kittery is booming, the foreside has packed in more coolness in it’s few square blocks than I ever thought possible. But I’m not talking foreside, I’m talking the Island life. Badger’s Island life. Home of the strangely but oh-so-fun-to-say “Blind Pig Provisions”

So I don’t know the lore of the name, I may flip over to the website to check it out, nor do I really care unless it’s a good story. I just know the restaurant lives in what has been many iterations (dare I say a cursed location – I don’t think so as many events have changed with the bridge construction). See, for folks out of town Portsmouth and Kittery Shared a cool drawbridge over the Piscataqua River – the Memorial Bridge I think it’s called. It’s super famous. Well, that bridge was pretty much falling down into the river and had to be replaced. It connects downtown Portsmouth with uptown Kittery (ok, I made that up, there is no uptown Kittery) and Warren’s lobster house. For years, the elder generations in Portsmouth could not make it over to Warrens to get their baked haddock and salad bar, and many a tear was shed. 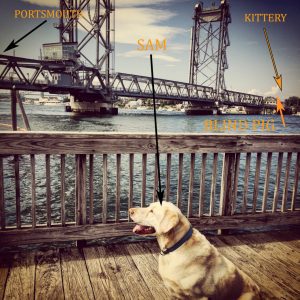 I’m going on a tangent now. I will stop. Promise. I’ll use photos to tell my story.

So directly across the bridge on the Kittery, Maine side is what they call Badger’s Island. I’d also like to know the lore of the Badger who warranted the island moniker. But I promised to stay on task.

For many years there was a dumpy old building on that island that was (and my facts may be wrong) a seafood and bait shop. You could get scallops mackerel and a box of chum. Later, if I recall, they began to get into the restaurant side by frying up said seafood and selling it to the public restaurant/take out style. I think it then changed hands a few more times and landed in the hands of someone who completely transformed the property (read: dumped a lot of money into it). Though I don’t know they details, I think they dumped too much money into it as they lasted but a weekend in terms of Longevity. I know it had lobster in the name and was really quite good, and as my solo march across the bridge I enjoyed my meal there. I was surprised to see it closed.

Enter the Blind Pig. With my absentmindedness I tend to call it other names, the Thirsty Pig, the Lazy Pig, the Lobster Pig, pretty much anything with pig in it. I now just call It ‘the pig place in Kittery.’ Matt Greco started the place in it’s current iteration whom I know from many years back doing cooking classes at Attrezzi. He was a private chef for a spell, and was one of the leaders in bringing the Islington Street Corridor back to life with his flagship restaurant, the Kitchen. And just to plug the kitchen, go there, and have the spudsters – deep fried potato puffs (croquettes if they cost more) that are absolutely addictive.

So now that we’ve had a history lesson, the Pig Place. 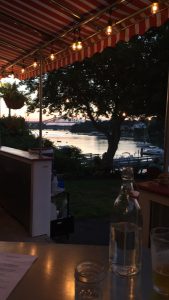 Inside it’s colorful with a big U shaped bar, plenty of family friendly tables, industrial seafood shack meets casual bistro. But I don’t sit there. Exit the doors onto a beer garden of sorts, you have a few four top tables in an enclosed porch that spills out onto what is essentially the parking lot, but the prettiest darn parking lot you’ve ever seen. Through an old Sycamore tree and sumac you have amazing sunset perfect views of the Piscataqua river bridge and can see both Maine and New Hamphshire, all the boats and the masterful currents of that queen sized river. Picnic tables and Dual Adirondack Chairs serve as seating options, and whenever we are there kids are able to run around freely to some extent – they at least have some wiggle room. This is the place to be at sunset, just be prepared for the New England vampire bats (mosquitoes) which no one can help. You do see diners complain which forever perplexes me – what do you people expect the restaurateur to do, especially when there’s indoor seating? These are the people that complain that the sun is too bright. The Pig Place has bug dope and citronella candles, but we all know that that just inspires the little blood suckers to find more creative ways to annoy you.

Servers are super friendly, work as a team, and are pleasant to have as your host/hostess. That’s all I need to say on that front, either you get it or you don’t. Bartenders make some terrific cocktails, and my only complaint because I always need something to complain about is the beer list. Now, there’s really nothing wrong with the beer list it just has a couple flop beers from Utah, too many dark beers and malty beers for my taste in summer, and not enough IPAs. It does get credit for having refreshing Summer beers and ‘Fresh Slice’ as well as 21st Amendment Watermelon in a can. It will get there I believe.

So food. Two Words: Fried Brussel Sprouts. If your family was anything like mine, brussels were boiled until grey, mushy, and above all – bitter beyond words. Slathered with butter to make up for the loss of character and consistency, and gulped down quickly because you had to. In other words, disgusting. But Sprouts, as I have learned, are so delicious when cooked properly. A slight bitterness and a resemblance to cabbage, but oh so tasty with a Lager Dion Mustard. I love the way they serve them with the Chinese Take out container tipped, as to say “I am spilling over with goodness.” We also had eggplant which was properly cooked, herbed French fries which are mediocre, they really need an extra fry cycle to get crispier in my opinion but I am a snob. My partner Sharon got some of the Dijon sauce because she likes mustard on her fries, which is universally weird. But it makes her happy. As do the cocktails. Her last run was with a drink Called the Gin Gin, which looked super cool with muddled berries in it, so cool the kids at the next table said “mom, we want that.” Mom said no.

The highlight on the food list for me so far is the farmhouse burger. A very simple concept – real beef that seems to actually taste like beef (organic or local – I think but not sure) on what appears to be a brioche (toasted) bun, some blue cheese and veg, and topped off with a fried egg sunny side up. So the egg has been on my ‘skeeves me out’ list for a while on a burger, the Australians love it I believe? Well I am starting to embrace. Rather than slather mayo on the burger as I am sometimes known to do, the yellow from the egg runs down into the meat and the bun and creates a savory meltdown of flavors. This is a good burger.

Prices are Seacoast-y and seems to draw a mix of locals and tourists, young and old, family and singles, and even a few bikers (not the Harley kind, the bicycle kind) who wear their helmets at the table. My spouse tells me ‘that’s a thing now’ to which I have no words. Who wears a bike helmet to eat? Are you afraid of someone seeing your tussled hair as you drip with sweat and suntan lotion, bug dope and road film???

So most definitely – go to the pig place, the Blind Pig – and also check out the Kitchen as they have a similar concept – local neighbor hoody joint that touches on a lot of comfort foods. You can go for entree’s too as they exist, and the Pig Place even has Chicken and Waffles which I don’t understand at all being a Northerner. My server said I’d like the burger better and I am sticking with that.