Technology and The Monetization of Everything. 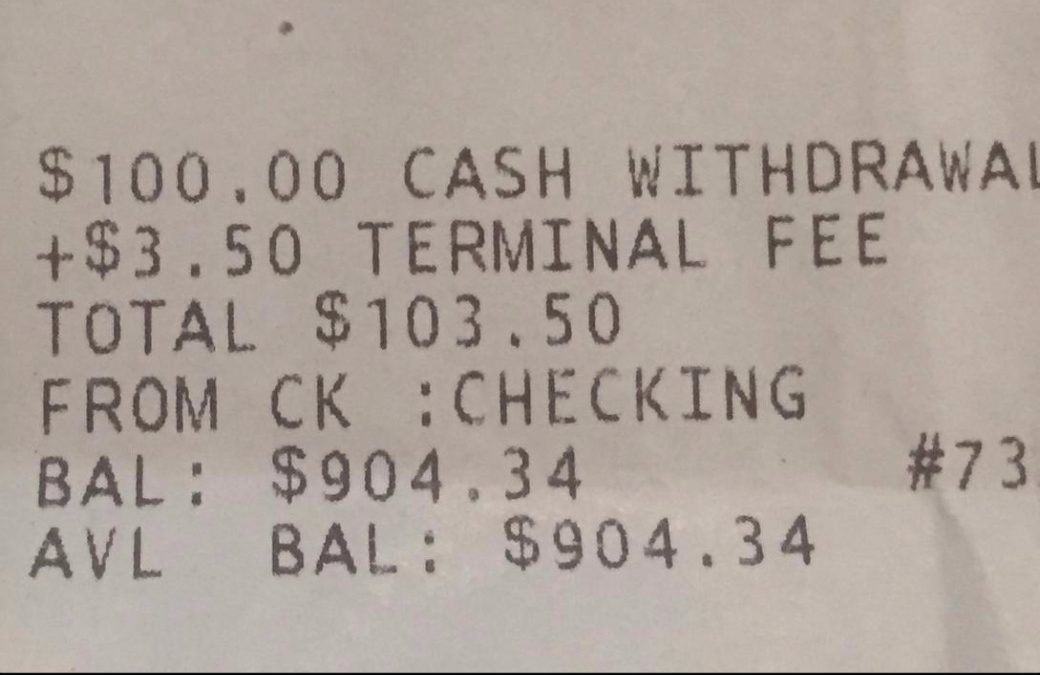 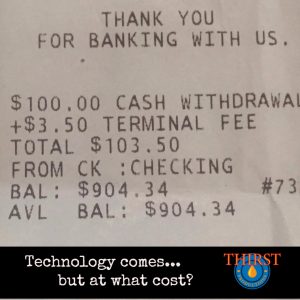 Many of us, myself included, tend to believe that technology is free. Aside from Microsoft Windows/Office, and specialty programs like Photoshop, I don’t pay for a lot of technology outside of my Playstation and iphone/PCs….or do I.

I dropped by People’s United Bank in Concord, NH recently and took $100 pocket money out of the ATM, seems harmless right? But then came the ‘terminal fee’ screen. Three Dollars and Fifty Cents. $3.50. For the pleasure of doing business at their ATM. I can’t help but pause and think, that’s absolutely ridiculous, highway robbery you might say (literally) since I didn’t even leave my car.

I think back to the revolutionary idea of not having to wait in line for a teller, to be able to access cash at night, on the go, in different countries – it all seemed so divine when it first came to be. And divine it was for some time, free access to cash anytime. Then crept in the first service fees, which seemed to hover at around a dollar for some time which almost seemed fair, but apparently the sky is now the limit. While we were basking in the glory of convenience, the technology was built out, fully embraced by consumers, business models were updated, and now the ATM has become mainstream. But at a very large cost. That one transaction would generate what essentially amounts to a 3.5% Tax.

Granted, I have a virtual bank, Charles Schwab, who not only does me well as a bank – even without local branches – but they reimburse my ATM fees up to a dollar amount I’ve never reached. So I never thought much of it until just this moment. What was introduced as an accessory to the banking business has morphed into a money skimming machine. Even though I didn’t pay the fee, it help explains my interest rate in the sub 1% range. I don’t know or care what the interest rate on my checking account is, but it has a lot of decimals and zeros. And who needs pennies, anyway?

Now imagine this – you need a $20 bill to tip your hairdresser. Or chaueffer, or to buy lottery tickets, whatever the case may be. At $3.50 you’d be paying 17.5% interest, or fees, to access your own money. Stop, Thief! Call RICO! Bust up these loan sharks! You may think of that way, but you are accessing a physical technology network that someone has to pay for. Heck $3.50 is .39% of my entire balance in my account. Can you hear the sucking sounds – especially if you were to use an ATM, say twice a week for this argument. $28 a month in fees. In my case that would be 3% of my entire life savings of $904!

And in the process, I am sure banks make crazy wild cash in the process. Virtual Banks like mine are happy to pay the fee since they don’t have to set up or maintain a physical ATM yet they can still reinvest my money for profit. It’s win-win. Everybody gets a piece of our dollar aven after the government grabs it’s piece.

Morph this idea to the internet, particularly social media – facebook, linkedin, twitter, google even. Every time you click your keyboard or swipe at your phone you are:

I speak of the Youtube model which now makes you view up to 30 second ads to see the 4 second video of Justin Bieber petting a monkey. The free technology (or what we perceive to be free) is free no more. It has been monetized into a dollar extraction machine – though in this example an advertiser is paying for our benefit. But you get the idea. Search google for plumbers in NH and the google master can count inquiries and results. Somewhere there is someone willing to pay for that data to better understand if the market is over or underrepresented with quality plumbers.

Which brings me to The formula: Technology (assets) can be converted to cash if consumers are willing (or forced) to use it over other means.

So if you want to roll in the similar riches of successful tech entrepreneurs, remember that simple but very effective realization that monetization is everything, technology comes at a cost. Find something people want, build it, then once accepted you turn the screws to squeeze out the dollars.  ATMs are just one of the most significant business upsets caused by technology, and at a rate of return like that, a very, very successful one.

Lesson learned, I will use my credit card from now on. At least I have a month grace period to gamble while the merchants cover the fees. Win-win. Technology rules.