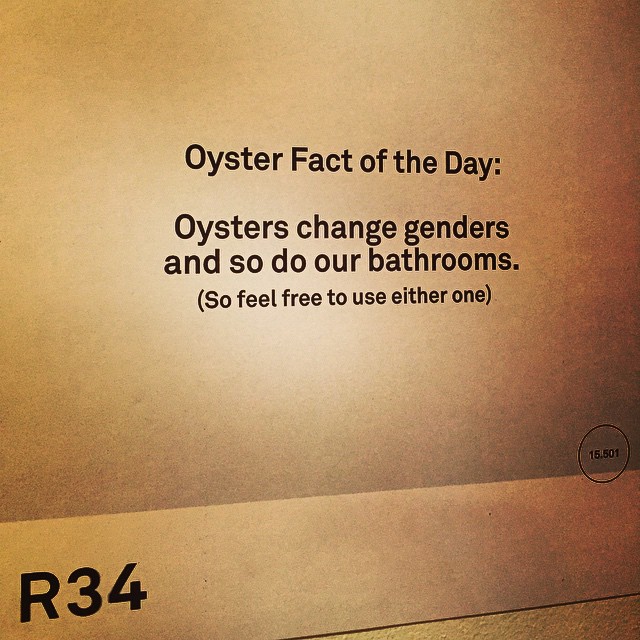 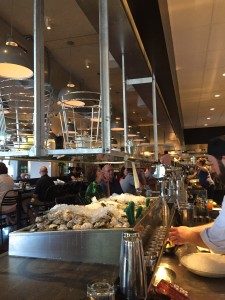 It’s really quite interesting, Portsmouth and Oysters went together like oil and water for many years. Aside from Jumpin’ Jays Shuck-a-Buck and raw bar, and dare I date myself, The Victory, I never even put Oysters on my radar when thinking about dining out in Port City. Yet now, practically overnight, we have not one – but two new Oyster-centric offerings barely a block from one another. Amazing! Stupendous! And they are alike yet so different.

Row 34 NH is based upon the lore (and this is hearsay folks, I have no facts to confirm) that the best Oysters harvested in Duxbury MA came from Row 34 – an area much like in a vineyard where the terrior produced the most pampered, best flavored bivalves money could buy. Is that true? Who knows, but it’s one helluva story and I am sticking to it. There’s also a secret code number embedded in the Portsmouth Row 34 – it is a number that begins with 15. Figure that one out, that’s your mission. Don’t return until you’ve satiated your oyster quota and know the code. You won’t find a huge menu or much beyond seafood, and that fits. You go for a purpose, if you want chicken tenders and pizza, just don’t. There is but one exception – whole belly (small!!) fried clams. 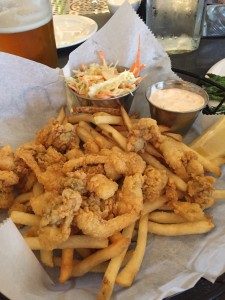 So Row 34 has absolutely terrific oysters. Nearly perfect. The day we went all of the Selections were from Massachusetts and included Wellfleets, a crowd pleaser. All were expertly shucked and full of that delicious saline liquor. Two mignonettes and traditional fresh horseradish and ketchup (cocktail sauce). No Oyster cracker. We also happened upon some of their house cured wild salmon that was breathtakingly good. The room is clean, modern, and efficient, and the vibe is cool and collected. Staff being friendly but not too friendly, confident but not too cocky. Cocktails and beer are on point. These things makes me happy. Their website offers up the following mission statement. I have a man crush on an oyster bar. 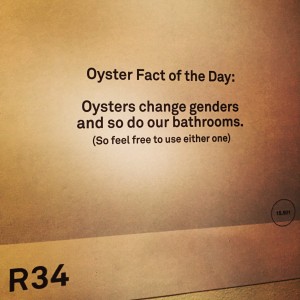 We’re Row 34. If we could eat oysters and drink beer for every meal period, we probably would. Professionals Only. 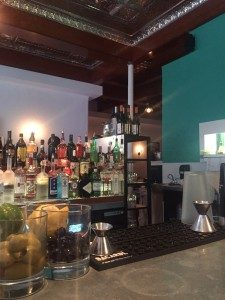 Then onto the Franklin Oyster House, yet another of Jumpin’ Jay McSharry’s wildly successful restaurant offerings, started in tandem once again with Matt Louis, the chef from Moxy. They have a somewhat different, more direct mission in mind. And as a result the atmosphere is more casual and friendly, more conversational and more mingling among the locals. A totally different vibe in other words.

In 1867 the Franklin House of Fleet Street shucked and served oysters to the Portsmouth locals. N 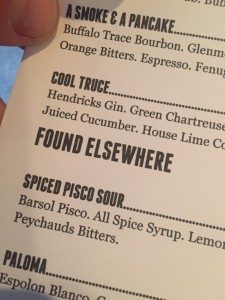 early 150 years later the Franklin Oyster House revives the tradition, serving oysters from East and West to pair with progressive dishes and cocktails.
I have the distinct pleasure of working in the Franklin Block Building, if by pleasure I mean a very old and very needy building in the heart of downtown. It is beyond cool to dine in the same building you work in with as much history as the Franklin Block. It carries a stately vibe.
The food at Franklin is more diverse, standard oysters on special (oddly Row 34 had all MA reared oysters and the Franklin had NH and ME bivalves on special – coincidence??) but some hearty happy non seafood dishes like fried chicken. Yes, fried chicken. Yet Portuguese Octopus, fresh shrimp with Harissa, Razor Clams and Mussels all took center stage. I like the diversity of this menu. I happened to sit aside one of the Portsmouth areas greatest chefs so I knew something was right, and struck up conversation and made a new facebook friend in the end. That’s the vibe of the Franklin – friends, sustenance and character. A few beers on tap, not quite enough for my ADD to align with, and I saw some great cocktails floating around – especially the Pisco Sour. I didn’t have an awful lot of time to soak in the menu on my first visit, but I’m not worried, I have plenty of time – this place will be around for quite some time. It fits the character of our town and has history. And from what I hear about the Franklin Block – a lot of ghosts to keep it company. 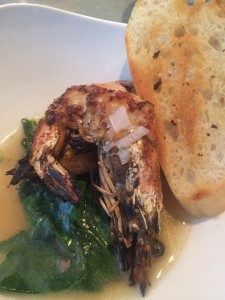 Update – on a return visit to the Franklin, I had the distinct pleasure of enjoying a rare and delicios Deciduous Brewing Company beverage (Newmarket, NH) as well as what I would say to be the finest Oyster Stew in Port City. The last great Oyster Stew I had was at Jumpin’ Jays, but this one was more delicate, had beautifully chopped and poached (not overcooked) Oysters, and just the right amount of cream, salt and flavor. With grilled bread. Holy yum. Also had the fish cakes which are deep fried puffs (potato based? Whipped with fish, fried) and some fries (adequate, not the best nor the worst). Will be back!