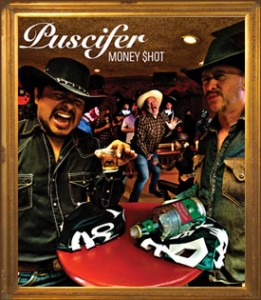 Maynard James Keenan is a talented, but quirky guy with an ego problem. His music can be so damn expressive at times, touching areas of musical intellect that few can reach. It’s part of his brilliance. Puscifer is his alter ego to Tool and Perfect Circle, a more intimate, personal extension of himself, his pet project if you will. The name was dreamt up some time in the early 90’s, originally idealized as a skit on Mr. Show. Apparently Maynard has a sense of humor and enjoys playing with his audience like a cat with a ball of string. Unpredictable and moody at best.

Money Shot is the venture’s latest effort, a perhaps crudely named but incredibly emotional, touching, if not ethereal album. Almost an anthem, yet to what I have no idea. Parenthood? Maturity? Porn? Perhaps the album serves merely as a means to reflect Maynard’s current state of mind. If he were to explain himself, you’d be wise to take his words with a grain of salt as he is not one to provide a straight answer. It is studio driven music with soul, though I know Puscifer loves to play live. It’s Led Zeppelin on a blend of opiates and ecstasy. And I warn you, you won’t like this album upon first listen, it is slightly schizophrenic with very little logical connect among its tracks. But take my suggestion here and hit ‘shuffle,’ embrace the insanity and enjoy the ride.

The album offers little in the way of coherency at first, but it later somehow starts to make sense musically. The album is rich with layers, drifting from slow hypnotic tempos and harmonies to driving rock – not metal nor rock ‘n’ roll – but hard driving pop/electronica. Sort of like Enya meets Adele with a whole lot of Maynard thrown in, and just a little Black Flag. It’s that hard to explain. He often wears a cowboy hat, but this ain’t country.  Bass and Drums are united on a single front; like the spine they support nearly everything seamlessly, adding punch where needed, drawing us through the metaphoric layers of complexity. Guitar serves as a mere accent on most tracks. The songs are built upon heavily processed synth with ambient layers. The music tells short stories that build, crescendo, peak, and take the user to different emotional levels. Formula rock (not picking on you Creed) can take a whole lot of lessons from this type of arrangement, especially vocally. But then again, this music is not for the masses, it is evident that has never really been Maynard’s intention.

His vocals are highlighted/complimeneted/superceded by Ms. Carina Round, a secondary singer whose voice is haunting and powerful. She has been a staple of the Puscifer project for some time. In Money Shot, she comes onto her own, with her vocals leading many of the song compositions as well as providing rich support to Maynard’s croon. And by my description of ‘haunting’ I would like to note that Round’s songs ‘Do You’ and ‘For Everything A Reason’ are adapted into American Horror Story. Her voice is that evocative at times. Yet her solo work, while engaging, lacks a certain something that appears when she works with the mad genius himself.

In songs like ‘Agostina’ we see the mastery of the ensemble’s work as one unit. What I wouldn’t give to be in studio for this, I can’t help but wonder if its recording was a remote, disjointed effort of sheer genius or a melding of minds in one space. One may never know. I do know the lyrics show reference to Maynard’s daughter, and speak to the connection to his newborn baby girl – Lei li Agostina, “It’s you, our intersection, our divine collision.” Having this fact at hand, to me, doesn’t make the song more powerful, it stood on its own as a reference to something bigger than life. Knowing it is a devotion to a child grounds the song in reality and makes it more vulnerable.

And looking back to ego, Maynard’s Achilles Heel – there is actually a song, ‘Superstition’, that contains spoken word, a story of sorts, by someone who was lucky/unlucky enough to spend some face time with Maynard. The narrator tells a tale of his time alongside Maynard who spent the day listening to ‘Foreigner’ on a Sony Walkman and being aloof, finally gaining some semblance of coherency (after mumbling about peanut butter syrup or something totally random) to proclaim “We will never know world peace until three people can simultaneously look each other straight in the eye.” This is one track that could be on a B side and forgotten, except that when we actually get to a musical moment post the ego-centric ramble, the music is very powerful. Often times I want to click the skip button but anticipate the reprieve of a slick and chaotic bass run, tribal drums and chanting, hypnotic calls –urging to “Find a way through, around, or over.” Publishing a story about oneself on one’s own musical expression project defines ego in my book. Classic Maynard.

The album continues to paint pictures and draw listeners through a haze of hypnotic, somewhat trippy but very intentional songwriting elements that feature multi-dimensional vocal arrangements over driving, focused beats. After all is said and done, I also have to praise the production of the album, the bass is punishing but crystal clear, the drums are loud but not center stage, and vocals are crisp and thick. Money Shot is killer when you are just looking to chill with a set of headphones and do whatever it is that you do to loosen yourself up at the end of a long day.